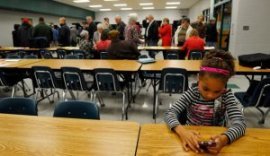 Destiny Davis plays a game on a cell phone as she waits for her mother to vote at Slater-Marietta Elementary School on Election Day, November 2012.

Appendix available in the PDF and Scribd versions of this issue brief.

In the wake of the 2012 presidential election, Republican elected officials and conservative political pundits publicly bemoaned the party’s failure to connect with and win over voters of color. 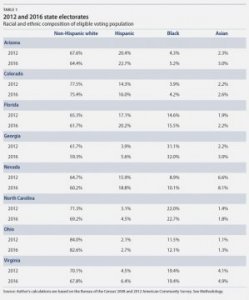 Furthermore, they conceded that a failure to fare better with this demographic in future elections would carry dire electoral consequences and doom the GOP’s chances of winning back the White House. Some may view the Republicans’ wide-spread success in the 2014 midterms as an indication that the GOP’s concerns immediately following the 2012 presidential election are no longer applicable. However, it shouldn’t be lost on anyone that midterm elections have historically had low voter turnout rates, and ultimately, the voter makeup of the electorate in midterm years has been very different than in a presidential election. Therefore, the upcoming 2016 election provides the first test case of the Republicans’ post-2012 election predictions.

Since 2012, these demographic challenges have only grown more acute. 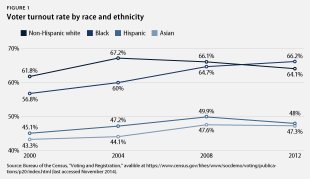 As people of color become an ever larger share of states’ electorates, the political implications for both parties comes into even sharper focus: In 2016, to win the presidency—as well as many U.S. Senate races—candidates will need to secure substantial support from voters of color.

The demographic changes in the United States are far from being fully realized: Not until 2043 will people of color make up a majority of the U.S. population Despite the seemingly long trajectory of these changes, the political implications are already being felt in many states. By 2016, demographic shifts will be influential in states such as Florida, where voters of color are an increasingly significant share of the electorate, as well as in states such as Ohio, where elections are close and growth among voters of color is rapidly outpacing the growth of the non-Hispanic white electorate.

@knittingknots @Shoq @Steverocks35 of course they do! But state elections electorate is much older, whiter, and more conservative Sat, 10 October 2015 03:21 AM

@jimantle also jim is latino a small electorate in your old state of MA? you think stricter immigration policy win be popular there? Sat, 10 October 2015 07:47 PM