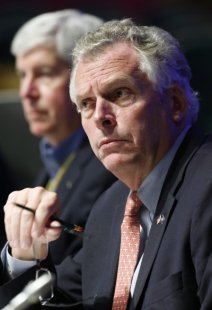 RICHMOND — People registering to vote in Virginia would no longer be required to check boxes to indicate whether they are U.S. citizens or felons whose right to vote has not been restored under changes being considered by the Virginia Board of Elections.

Voters would still have to affirm elsewhere on the application, under the threat of a felony conviction, that they are citizens and otherwise eligible. But instead of responding to separate questions about their citizenship or felony status, they would simply sign the form on a line near language that attests to their eligibility based on those and other requirements.

The distinction may seem small, but it is one that hits the political hot buttons of voter fraud, illegal immigration and the restoration of felons’ voter rights. The proposed changes have triggered yet another battle over the rules of electoral engagement in Virginia, a critical presidential swing state that is also embroiled in a redistricting battle.

Elections officials said the change in the registration form is meant to simplify the process and to avoid rejecting otherwise eligible voters who simply overlook a box when filling it out.

But Republicans said they were concerned that Gov. Terry McAuliffe (D) was trying to pump up Democratic voter rolls ahead of critical state and national elections. They are calling on supporters to protest the proposed changes at an election board meeting Tuesday outside Richmond.

“If we let Terry McAuliffe have his way, illegal aliens will be able to vote just like you and me — unless you make time to help, ” Sen. Thomas A. Garrett Jr. (R-Buckingham) said in an e-mail to supporters and constituents. He urged residents to turn out Tuesday morning to help “thwart McAuliffe’s attempt to disregard the Constitution.”

When people register to vote in Virginia, they have to check a series of boxes to answer questions: “Are you a citizen of the United States of America?”; “Will you be at least 18 years of age on or before the next General Election day?”; “Have you ever been convicted of a felony?”; and “If YES, have your voting rights been restored?”

Currently, if the applicant does not check a box in reply to any of those questions, the application can be denied due to a “material omission.”

Applicants also must sign the form beside a statement that reads, “I swear/affirm, under felony penalty for making willfully false material statements or entries, that the information provided on this form is true.”

Under the plan being considered, questions about felony status and citizenship would remain on the form, but failure to respond would be deemed an “immaterial omission” — meaning the application could not be rejected on those grounds.

The language by the signature line would be expanded to read, “I affirm that I meet Virginia’s requirements for U.S. citizenship, age and residency and am not prohibited from voting due to felony convictions or adjudication of incapacity.”

McAuliffe spokesman Brian Coy directed questions about the proposed changes to the elections board. Board Chairman James Alcorn said the changes were proposed by staff members at the Department of Elections “so that the focus will be on determining voter eligibility, not whether the voter is able to complete the form. Our goal is to make it easier for eligible Virginians to participate in the electoral process.”