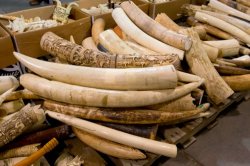 Today Woodland Park Zoo and our campaign partners announced Initiative 1401, a citizens’ initiative to strengthen laws banning sales of endangered species products in Washington state. In November, the people of Washington will be able to vote YES on I-1401, and significantly decrease our state’s contribution to the current unprecedented rate of tiger, elephant, rhino and lion poaching.

These wild animals don’t roam our state, but parts of them certainly make their way into the U.S. and to our region. Washingtonians will not spot a lion stalking its prey on the San Juan Islands or see a rhino charging the wheat fields of the Palouse, but we might have the opportunity to buy an ivory trinket in Tacoma or a tiger claw in Seattle. I-1401 will make the sale of these precious products illegal, considerably decreasing the demand in Washington state and helping to stop the senseless killing of animals fighting for their survival.
Earlier this year, Woodland Park Zoo’s 96 Elephants campaign worked to pass legislation banning the sales of ivory and rhino horn in Washington, but opposition was strong and the bill failed. Now we’re taking the decision from Olympia and putting it into the hands of the people of Washington. This decision is your hands, and the hands of your family, neighbors and community.

Which one is truly precious?


More about I-1401: if passed, I-1401 will outlaw all sales of endangered species parts within the state of Washington. The list of protected animals under this legislation is significant: elephants, rhinos, tigers, lions, leopards, cheetahs, pangolins, marine turtles, sharks and rays will be protected. These animals are the most trafficked species threatened with extinction according to illegal wildlife product seizure data.

There are exceptions for bona fide antiques, musical instruments and items gifted for educational purposes, among others.

With the opening of Banyan Wilds, we've been talking a lot about tiger conservation and our work to save big cats from extinction. We are tremendously excited at the opportunity to get behind I-1401 and to fight for one of our institution’s core values.

A tiger caught on film by a remote camera trap set up in the Malaysian field site of our tiger conservation project. Poaching is a major threat to tigers, and the illegal trade in tiger parts fuels the poaching crisis.

You can help! Look for signature gatherers at the grocery store, and sign the petition to get I-1401 on the ballot. Then on November 3, please vote YES on I-1401.