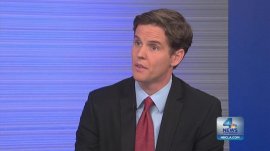 Aside from English and Spanish, Californians will now be able to choose between Chinese, Hindi, Japanese, Khmer, Korean, Tagalog, Thai and Vietnamese, according to a statement from Asian American’s Advancing Justice Los Angeles.

In 2012, about 58 percent of Asians and Latinos were registered to vote in California, as opposed to 72 percent of non-Hispanic whites and 69 percent of African Americans, according to Advancing Justice.

The legal and civil rights group hopes the new languages offered online will boost participation “among Asian Americans and Latinos in California who tend to have relatively low voter registration rates.”

Marshall Tuck: "We Have a Real Crisis"

Marshall Tuck is running for State Superintendent of Public Instruction. He is challenging the incumbent, Tom Torlakson. Marshall-the former president of Green Dot Public Charter Scools and who ran Partnership for L-A Schools under the Villaraigosa tenure-tells NBC4 Conan Nolan why he is running for the state office. (Published Monday, Oct. 20, 2014)

How Can California Increase Voter Turnout?