Election Day in US 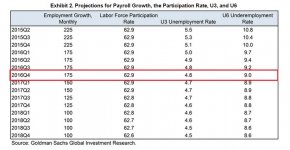 Goldman Sachs: “Consistent with our call for above-potential growth in the coming years, we expect employment gains to continue to substantially outpace trend labor force growth. We expect the U3 unemployment rate to reach 5% by early 2016 and the U6 rate to reach 9% by the end of 2016.”

And as you can see in the above chart, we are looking at 4.8% unemployment in the final quarter with the US basically at full employment as gauged by the broader U-6 unemployment-underemployment rate, at least according to GS. Now I can already hear the cries — especially from Republicans — of “What about the labor force participation rate?” It is currently about three percentage points lower than where it was prerecession — 62.9% vs. 66% — and Goldman sees it unchanged between now and late 2016.

Now given the aging of the Baby Boomers, you can’t just expect the LFPR to bounce back to where it was in 2007. It’s people with that expectation who say things like, “The real jobless is rate is 10%.” Or some such. That is not how GS sees it:

We find that the current participation rate is depressed by about 1.2pp relative to pre-recession trends, consistent with recent Fed research and a range of other studies. We assume that about half of our estimate of the remaining cyclical shortfall reverses by end-2017. We also estimate that population aging should subtract about 0.25pp from the participation rate per year over the next few years. Accounting for both effects results in a steady participation rate over the next couple of years that gradually gives way to a 0.25pp/year rate of decline. At that point, the trend rate of employment growth needed to keep the unemployment rate unchanged is about 75k/month.

Final Day Of US Election Campaigning

In US, final day of election campaign

In Election Day Olympics, US gets an F from the Russian judge

@PDXBeerRanger The day I get to vote in a US election, I am going to throw myself the biggest party. The American Dream can come true! Lol Wed, 14 October 2015 12:42 AM