When is us Election Day 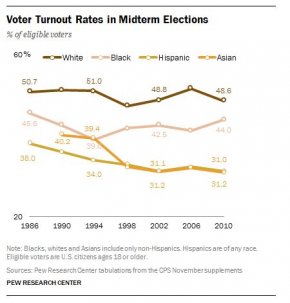 A Sun Valley resident votes at the polling station located at Our Lady of The Holy Church on election day at the Sun Valley's Latino district, Los Angeles County, on Nov. 6, 2012 in Calif.

Hispanics are playing an increasingly impactful role in national politics, and how they turn out next November stands to be a key factor in which party emerges in control of the White House and Congress the following January.

Hispanics are the largest minority group in the U.S., comprising about 17 percent of the U.S. population, according to the U.S. Census Bureau. 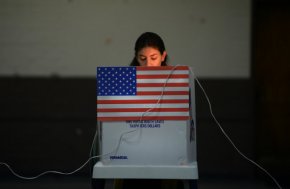 And that number is only expected to grow: By 2060, the bureau projects Hispanics will make up 29 percent of the population in what by then will be a majority-minority nation.

[READ: Who Are Donald Trump's Voters? The Less Engaged and Less Informed]

"Every 30 seconds, a Latino citizen turns 18 and becomes eligible to vote, " Gabriel Sanchez, a political science professor at the University of New Mexico, said at the Congressional Hispanic Caucus Institute's annual policy conference in Washington on Tuesday. "That's 66, 000 each month. That's a powerful number." 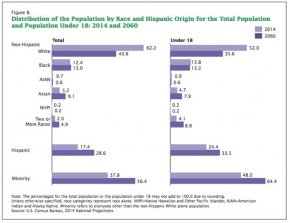 At the same time, Hispanics' demographic heft is offset by their historically bad turnout on Election Day.

In presidential years since 2000, Hispanics have barely edged Asians – who make up just 5 percent of the U.S. population – in a race to the bottom for voter turnout, with just 48 percent of eligible voters showing up at the polls on Election Day in 2012, according to the Pew Research Center. Meanwhile, 67 percent of blacks and 64 percent of whites came out to cast a vote.

It's even worse in off years, when voter participation drops overall. Eligible Hispanics have voted in the smallest percentages or were essentially tied with Asians for the lowest turnout in every midterm election since 1986. 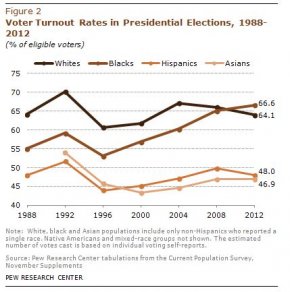 Part of the problem, Sanchez said, is the relative youth of the Hispanic population, which has a median age of just 28 years old, according to the 2013 American Community Survey.

"The group of 18- to 29-year-olds is the population least likely to vote, " he said. "That population is the most cynical about their vote actually mattering."

The good news for Hispanics and the candidates who rely on them as a voting bloc is that there is significant room to grow, based on the number of eligible voters who have yet to register, let alone turn up on Election Day.

In several key states that control not only large numbers of electoral votes but have also emerged as swing states or future swing states, Hispanic voters are uniquely positioned to determine the outcome of national races.

In Texas, which has the second-largest Hispanic population in the U.S. after California, 2.2 million Hispanics are registered to vote, while 2.6 million are eligible but aren't registered, according to data from the opinion research group Latino Decisions.

When is Election Day in the United States?

What would happen if there was no power on US election day?

We'd vote on paper ballots, which would be sealed in locked boxes and shipped by armored car -- like they did for 200 years before electronic voting. (Except the earliest armored cars were horse-drawn.)