As It Unfolded: Election Day In Mass. 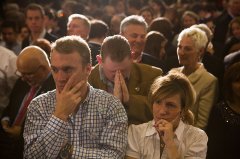 See how Election Day 2014 unfolded in Massachusetts. Latest on top.

As we watch the close governor’s race, The Associated Press reports:

Depending on how close the totals are in the Massachusetts governor’s race, the losing candidate could request a recount.

State Secretary William Galvin said that if the total margin of victory is one half of 1 percent or less, the losing candidate could request an accelerated recount process. That would require the candidate to collect several thousand signatures.

Galvin, as the state’s top elections official, would order the recount.

If the margin is more than one half of 1 percent, the candidate would have to collect 10 signatures in each precinct in the state — a much higher bar.

There is no automatic recount process in Massachusetts.

Baker is now up by a little more than 14, 000 votes with 80.5% of precincts reporting results #mapoli #magov

@TheYoungTurks Flip the script on the GOP idiots; calculate how many school/mass shootings there will be until Election Day '16 & rub it in Fri, 9 October 2015 12:47 AM