When 'Who Will Win?' Beats 'Who Do You Like 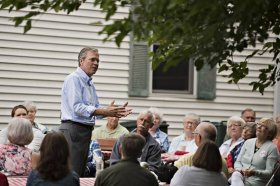 For everything, there is a market. There are markets that put a value on goods, real estate, equities, commodities, ideas, labor and, increasingly, on the fortunes of political candidates.

So who’s winning in the political prediction market for 2016? Hillary Clinton and Jeb Bush, by a wide margin.

And who’s the most likely to win it all? Mrs. Clinton, by a still wider margin.

Americans have watched for months—with 14 more months to go—as the poll numbers for Mrs. Clinton, Mr. Bush, Donald Trump, Ben Carson, Carly Fiorina, Bernie Sanders and other White House hopefuls have gyrated up and down, depending on the ebb and flow of the news and the debates.

These polls are all based on some version of this question: “Right now, which of these candidates do you prefer?”

But in crowded, pell-mell elections like this, statisticians and political scientists prefer a very different question: “Who do you think will actually win?” 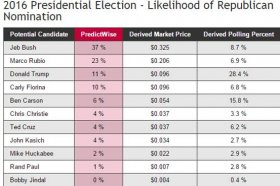 That question is at the heart of parimutuel betting that determines favorites and longshots in horse races and on the increasingly popular sites that allow people to wager on the outcome of events, including Supreme Court decisions and presidential elections.

David Rothschild, an economist at Microsoft Research who has spent years studying the powers of predictive markets, doesn’t dismiss typical polls outright. “What they tell us about the moment is meaningful and important, ” he says.

But asking people who they expect will win, instead of who they prefer, “grabs a much larger slice of people’s experience and knowledge, including a whole range of idiosyncratic facts” that are otherwise impossible to quantify, he says.

Mr. Rothschild now helps run a Microsoft research project, PredictWise, which uses an aggregate of a number of Internet betting exchanges and prediction markets to create a running tabulation of the odds of something happening. Who will win the World Series? The odds-on favorite at the moment (at 19%) is the Toronto Blue Jays.

What about who will be the 2016 GOP presidential nominee? In a running average of national preference polls, Mr. Trump leads the pack with 28%, followed by Mr. Carson at 16%. Mr. Bush comes in a distant third, at 9%.

George Gallup correctly predicted that FDR would handily defeat Alf Landon by using a survey with a relatively small random sample of about 1000 people; meanwhile the Funk & Wagnalls Literary Digest used a sample of more than a million of its readers, who were disproportionately wealthy and supportive of the Republicans, to predict that Landon would win in a landslide, and at first the Literary Digest poll was more widely known.

The United States Government would be responsible for the funding for the prediction of the polls. !

@Mike Matthews: On election days I dont think it's good to release predictions or any stories that might influence voting until after the polls close. Thu, 8 October 2015 09:36 PM