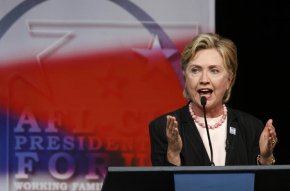 From the moment Democratic presidential candidate Hillary Clinton entered the race in April, she widely was considered the party’s presumptive nominee. Now, for the first time since she began campaigning earlier this year, that position may be in jeopardy.

The survey of 804 likely Democratic caucusgoers, conducted Aug. 23-26, represents a sharp decline in the former secretary of state’s popularity with voters from the Hawkeye State - an earlier Bloomberg/DMR poll from May had Clinton polling at 57 percent compared to Sanders’ 16 percent.

Hillary Clinton responds to a question at the AFL-CIO Presidential Forum at Soldier Field in Chicago on Aug. 7, 2007. Reuters/John Gress

Vice President Joe Biden, who has yet to announce whether he will enter the race, came in third place with 14 percent of the vote, up from just 8 percent in May. Biden is expected to make a final decision and announcement by the end of September.

But the vice president’s increased likelihood of running in recent months is not the only explanation for Clinton’s drop. When removing Biden from the mix, Clinton remained within single digits of Sanders, polling at 43 percent compared to Sanders at 35 percent.

The results are Sen. Sanders best to date in Iowa. In previous Iowa polls, Clinton has led the Vermont senator by a minimum of 19 percentage points, and Real Clear Politics’ polling aggregator showed Clinton’s average lead in the state to sit at 22.8 percent more than Sanders.

And unlike his lead in New Hampshire polls, skeptics cannot claim there is a regional bias in Sanders' favor in Iowa.

But the Vermont lawmaker's lead in this poll does not necessarily mean Clinton is on a serious decline. A Suffolk University poll released earlier in the week indicated Clinton had 54 percent compared to Sanders at 20 percent - a much healthier lead for the former secretary, Salon reported.

Democratic presidential candidate Sen. Bernie Sanders, Ind-Vt., uses a bullhorn to speak to supporters gathered outside a campaign stop at New England College in Concord, New Hampshire, on May 27, 2015. Reuters

Nevertheless, the shakeup in the polls reminds some of eight years ago. "This feels like 2008 all over again, ” said Selzer, according to the Des Moines Register.

And there are similarities. In the 2008 Democratic presidential primary race, Clinton led then-Sen. Barack Obama by 7 points in an early October poll in Iowa. By late November, he had surpassed her, bolstered by the youth vote and first-time caucusgoers.

What are the latest election polls, update?

RT @BurnabyNOW_News: It's a case of duelling polls! The only thing certain is #Burnaby North-Seymour will be an action-packed race Oct19 ht… Fri, 16 October 2015 01:29 AM