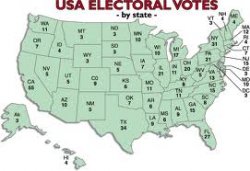 If you like interactive political maps, you're going to love the Election Dashboard at Huffington Post. You should check it out.

I know it's early, but things simply don't look that good for Mitt Romney. At this point, based on available polling information, this is how HuffPo breaks it down.

They say there are 170 electoral votes in states where Mitt Romney is strong. They also say that, at this point, no additional states lean towards Romney.

That would mean that if Romney took all the tossup states (70), plus states where he is strong (170), he would sit at 240 electorate votes with 270 needed to win.

I'm not saying Romney can't win, much too early to say anything that foolish. But if HuffPo is close to right in how they see things, Romney needs to win all the tossup states and then take about 30% of the electoral college votes (30 out of 93) in states where Obama is deemed to have an early advantage.

I guess we'll be looking at those tossup states and those "lean" states pretty closely as events unfold. And the campaigns will be doing the same thing to decide where to spend their time and money.