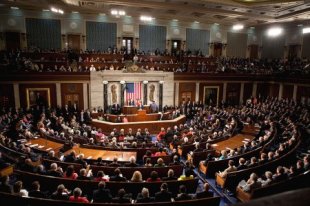 The chances of a tied presidential election in the Electoral College seem as remote as the odds of the Titanic hitting an iceberg. But there are at least six scenarios that could drive the Obama-Romney contest into overtime.

By one account, the odds were 1, 000 to 1 of the huge ocean liner striking an iceberg in 1912 and sinking. The rest was history.

In 2012, there are now three plausible scenarios that would each give Barack Obama and Mitt Romney 269 electoral votes in the November election. A candidate needs 270 votes to become president.

And there are two even more bizarre twists. If the Democrats retain control of the Senate in the general election and the presidential candidates are tied, Mitt Romney would likely become president and Joe Biden would be his vice president.

Thanks to the 12th Amendment, a tie in the presidential race is sent to Congress once the electors from each state cast their votes in December. If a candidate doesn’t have a majority of the electoral votes, the House picks the president and the Senate picks the vice president. 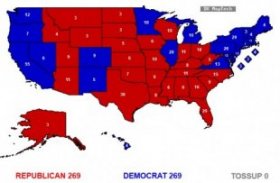 So in 2012, a tie is as good as a win for Mitt Romney, since the GOP controls the House. The Democrats currently control the Senate, and if they retain control after November, Biden would win a subsequent vice presidential vote in the runoff election.

The 12th Amendment sought to clean up the convoluted election of 1800, when Thomas Jefferson and Aaron Burr tied in the Electoral College, and tie-breaking vote by Congress resulted in an awkward pairing of rivals John Adams and Thomas Jefferson. The amendment was ratified in 1804, and its rules decided the 1824 election, when the House picked John Quincy Adams over Andrew Jackson when neither candidate had a majority.

But the passage of the 23rd Amendment changed the electoral math. When that amendment awarded three electoral votes to the District of Columbia in 1961, the total number of electoral votes became 538–an even number that can be split exactly in half.

As we move through September, most political experts agree that nine states are toss-up elections that are too close to call. Two other states—Michigan and Pennsylvania—could come into play.

So quite simply, there are various combinations of those nine states’ votes that come out to a 269-269 vote tie between Obama and Romney.

Obama in 2004: Eliminate The Electoral College

@Asher_P_Fly @HillaryClinton This madness combined with flood of illegals & Obama's Muslims serve to skew the Electoral College by their #'s Thu, 8 October 2015 02:28 AM