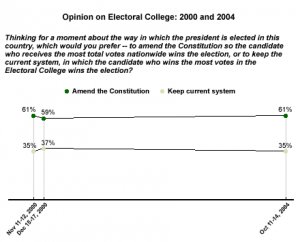 More than 100 million Americans will take to the polls to cast their ballots for president. However, these votes do not directly decide the winner. Why? Ask the framers of the Constitution - they rejected the idea of election by direct popular vote in 1787 in favor of the Electoral College, which has picked most of the presidents since George Washington. One of their biggest fears was that with a direct popular vote, the most populous states would always decide the presidency.

The Electoral College has been repeatedly scrutinized since its creation, most recently during the 2000 election, when Al Gore won the popular vote but George W. Bush won more electoral votes and eventually became president. These events created some public dissatisfaction with the Electoral College process, particularly among Democrats. Recent Gallup polling shows that wariness over the process has lasted - the American public would still like to change the election system. Still, the prospect of amending the Constitution in order to do so would present a significant challenge.

Each state is allocated a number of Electors, equal to the state's number of its senators (which is always two) and the number of its House representatives. Whichever presidential ticket wins the most popular votes in the state also wins all of that state's Electors. Maine and Nebraska are the two exceptions to this practice; in those states, two Electors are chosen by statewide popular vote and the remainder by the popular vote within each congressional district. Colorado residents are voting on a ballot proposal Tuesday to move from a winner-take-all allocation of electoral votes to a proportionate allocation based on each candidate's share of the vote.

A Gallup Poll conducted in the wake of the aforementioned 2000 election showed that a majority of Americans (61%) would support amending the Constitution so that the candidate receiving the most popular votes would win the election. Little more than a third (35%) preferred keeping the Electoral College system as it is. Gallup asked the question again last month* and found that nearly four years later, public opinion on this question is virtually the same.

Airline Safety and the Electoral College