How Powerful Is Your Vote? 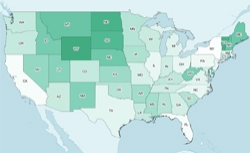 There are many reasons to dislike the Electoral College: It gives a handful of states the lion’s share of campaign attention; it allows a candidate with fewer votes to win; it depresses voter turnout in “safe” states; and it’s plain confusing. Now add this one: The electoral power of your vote depends on where you live.

In other words, one Wyoming voter has roughly the same vote power as four New York voters. (Mouse over the map and it will show you where your state ranks in voting power.)

“Vote power, ” in the sense used here, doesn’t entirely describe the probability that your individual vote can decisively influence the outcome of the presidential election. To determine that, you also need to know how tight the election is in your state and nationwide. Although a vote in Washington, D.C. is the third most powerful, for example, the probability it will change the outcome of the election is incredibly low.

In the aggregate, though, vote-power disparity does change outcomes, yielding elections, such as the 2000 election, in which the winner is not the one with the highest popular vote. And because the Electoral College mirrors the allocation of representatives in Congress, this map also charts legislative power; 143, 000 people in Wyoming have the same number of legislators in Congress as 500, 000 in New York.

This animated map shows how the states voted in every ...

Taking a final look at the electoral map

Shifting states on the electoral map

What states electoral votes are not in?