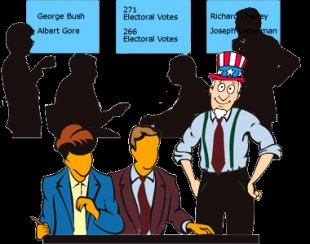 Did you know that voters in the United States don't vote for the president? People actually vote for a group of electors when they go to the polls on Election Day. These electors have pledged to support a party's nominee for president. In many states the ballot lists only the names of the nominees and not the names of the electors, so many people believe they are voting for the president.

The delegates finally agreed on a compromise. Electors chosen by each state would elect the president. Ordinary citizens in each state would have a say this way, but the final decision would be made by people who were better informed about the candidates and the issues.

The Electoral College, this system of presidential electors, is still in effect today, although some adjustments have been made over the years. The electors voted for two candidates at first. The one with the highest number of votes became president. The one with the second-highest number became vice president. In 1796, political foes were chosen for the two posts - Federalist John Adams for president and Democratic-Republican Thomas Jefferson for vice president.

There was a tie between Thomas Jefferson and Aaron Burr in the next election. The House of Representatives had to decide who would be president. The fact that the system needed to be adjusted was clear. The 12th Amendment to the Constitution was passed in 1804. Candidates are now nominated to run only for president or only for vice president. Electors vote for president and vice president separately.

Getting Rid of the Electoral College - US Politics

What does the united states electoral college do?

@Mark Anthony Lyon: WE THE PEOPLE OF THE UNITED STATES OF AMERICA ARE FOR BERNIE SANDERS!!! THE ELECTORAL COLLEGE BEST GET THAT!!! Wed, 14 October 2015 03:54 PM