Were Scotland to vote for independence in the September referendum the position of MPs who had been elected for constituencies which are no longer part of the UK would have to be considered. In the event of a vote in favour of independence, the Scottish government’s timetable is for the first elections to an independent parliament in May 2016. In this case it could be possible for a UK government elected in 2015 to lose (or enhance) its majority in the House of Commons as a result of Scottish MPs being excluded from the House of Commons.

Across the UK, Labour and the Conservatives have each had a majority of House of Commons seats at eight elections since 1945. Two General Elections have resulted in no party getting 50%+ of the seats, 1974 (Feb) and 2010.

In Scotland, Labour has had the majority of seats in all but two General Elections, 1951 and 1955; and the Conservative share of seats has been 2% or less since 1997.

For ‘RUK’ (“rest” of UK, excluding Scotland) the result in terms of the largest party would twice (1964 and February 1974) have been different from that for the UK as a whole, without Scottish MPs. On two further occasions (October 1974 and May 2010), the exclusion of Scottish seats would have given/denied a party an overall majority, on the basis of votes cast and seats at the time. 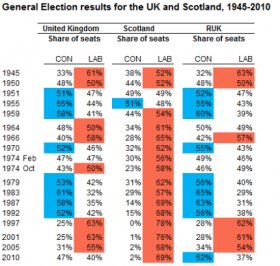 Italy votes in general election as Europe watches and waits