General Election result: Who would have won under a different voting system? 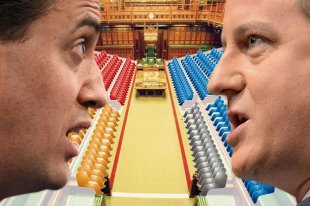 Does the electoral system really work in multi-party Britain?

These figures show how unrepresentative Parliament is when compared to the popular vote. Here's just how different it would be:

- no, the Tory government would NOT have got a majority under proportional representation

- there would be 40 seats between Labour and the Tories, not 100

What would the result have been under proportional representation?

It’s difficult to calculate because we don’t know how a PR system would change the way that people vote.

BUT, if you were splitting the share of the vote crudely between the parties, you’d end up with something more like this.

The Greens would also see a huge increase from 1 to 24 MPs.

There's one catch with that

While Labour voters would relish the plummet in Tory votes, in reality, a set of results like this would mean that the Tories would still be the largest party. And they'd be likely to form a coalition with the likes of Ukip or even the DUP, not something that left-wingers would enjoy for five years.

The system we have now

First-past-the-post means you can get a lot of MPs with not much of a share of the vote.

There is a huge discrepancy between the SNP’s 56 seats and Ukip’s 1 seat. Yet Ukip have received 3.7 million votes, and the SNP 1.4 million.

The difference is even starker when you look at the DUP. They have recorded less than 200, 000 votes, but have 8 seats.

Let's take it blow by blow.

How MPs were allocated

Yep. We have an electoral system that can’t even allocate the MPs in the same order as the popular vote, let alone in proportion...

Would a PeopleRank-based voting system (or one where weights were unequal) be useful in general elections?

Yes and No.
While the main principle of democracy is, indeed, one vote per person, there are some serious criticism to democracy. A serious problem like opression by a largely uninformed majority on a specific subject and others may appear, and frequently we do notice them. There are cases of divergences between public opinion and scientific community opinion about one same subject.
There is a Wikipedia article on this subject that addresses some problems that may appear within a democracy: