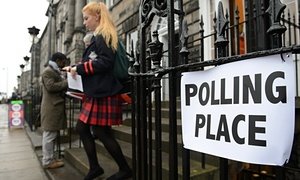 The Scottish independence vote shows that young people will turn out if they feel engaged by the political process. Photograph: Leon Neal/AFP/Getty Images

So why bother trying to convince them?

While political parties are not being this openly downbeat about it yet, young people are undoubtedly becoming an ever-declining force in UK electoral politics.
Why is this the case?

2. The UK has an ageing population

The makeup of the British electorate is, albeit slowly, skewing towards older voters.

Over 65s are making up a bigger chunk of the electorate and they are more likely to vote. As a result they have a disproportionately large sway over the election outcome.

A cynic would say that this means that it’s much less pressing for political parties to formulate policies to benefit young people as it’s less likely to get them votes. At the end of the day, it’s the grey vote that decides elections

Although it’s not as cut and dry as this – as the Liberal Democrats are likely to painfully find out after their U-turn on tuition fees – offending young voters is much less of a risk for more conservative parties.

But where can young people actually make a difference?

Nevertheless, there are still quite a few seats where attracting the votes of under 25s might be crucial to whoever wins.

While there is no age-breakdown of eligible voters by constituency, we do have it for the mid-year population estimates for 2013 from the ONS. This gives us a good picture of the age composition of the electorate for each seat despite including, for example, migrants who are ineligible to vote.

We found 35 seats in England and Wales where at least 20% of the voting age population was between 18 and 24. Just below half of these (17) were marginals in the 2010 election – by that we mean the gap between the winning and second place party was 10 percentage points or less.

Foremost among these is the Labour-held (and student heavy) seat of Sheffield Central where over a third (38%) of the voting-age population is under 25. The MP for the seat, Paul Blomfield, won against the Lib Dems in 2010 by just 0.4 percentage points – although the race this time round is unlikely to be as close.

Other key seats to watch out for in May include Nottingham South, Birmingham Selly Oak and the Conservative-held Plymouth, Sutton and Devonport. We’ve listed all of the seats below.

@figmentjedi In the end, people in the general election just vote for whoever looks & sounds the coolest. Thu, 15 October 2015 09:56 PM

@TrillSouth I love Bernie but I have to vote for the Democrat that I know can actually win in the General election, I have 2B realistic :( Thu, 15 October 2015 11:48 PM