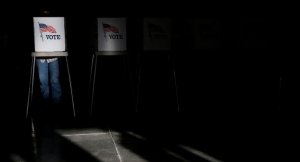 Only two states, Arizona and Washington, had online voter registration in 2008.

Finally, a change to election law that Democrats and Republicans can agree on.

And it’s sweeping the nation.

A wave of states in recent years have moved to allow residents to register online and the pace is quickening today as many more are debating the issue — a development that is swelling voting rolls, saving taxpayers’ money and providing a welcome demilitarized zone in the raging partisan wars over ballot access.

Only two states, Arizona and Washington, had online voter registration when Barack Obama won the presidency. Four years later, 13 states had systems up and running by the time Obama won reelection. Now, at least 14 additional states are considering legislation to enact online registration. (Virginia and New Mexico have already sent bills to the governor.)

For advocates, online voter registration is a win-win-win, simplifying the process for voters, making records more accurate and reliable for election officials and saving money for cash-strapped state governments.

“The evidence about this is just so clear, ” said David Becker, the director of election projects for the Pew Charitable Trusts. “If you can create a tool that harnesses electronics to allow voters greater convenience and creates greater security for an election and saves the voters of thousands of dollars in the process, why wouldn’t you?”

“All of these things are things both Democrats and Republicans value when it comes to elections, ” Husted told POLITICO, mentioning convenience, cost savings and security. “So it should be bipartisan.”

Here’s how it works in most states: Voters log on to a state website and enter their driver’s license number and sometimes, the last four digits of their Social Security number. The voter registration database then checks the info provided against existing motor vehicles records before allowing the user to register or change any of their information if they have previously registered.

The system has some drawbacks. Most notably, in most states, if you don’t have a driver’s license or a state-issued ID, you can’t register online. Computer scientists also have raised concerns about security in a few states.

With massive errors in voter rolls, states move to data ...

Sec. of state announces roll out of online voter registration

Where can I check social security online?