New poll results show that businessman Donald Trump has widened his lead over the other GOP presidential contenders in Illinois.

Victory Research, a political consulting firm, surveyed 801 "likely Republican primary voters" in Illinois from Aug. 16-18, and many of them chose Trump as their candidate.

The margin of error for the poll is 3.46 percent.

In another poll conducted by Victory Research in July, Trump took an early lead, but he was only ahead by 1.5 percent.

Since the last poll, the GOP candidates engaged in their first live debate and traveled the country campaigning.

Trump has not visited Illinois in the last month, but at the end of June, just two weeks into his presidential run, he spoke at the City Club of Chicago, where he addressed immigration and his recently severed ties with NBC.

Bush has also stayed away from Illinois so far on his campaign trail, but Sen. Walker has visited the state twice in the last month. 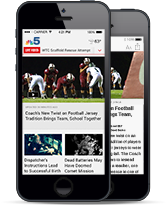 Download one of the NBCChicago mobile apps and have the news come to you. Watch live streaming newscasts, receive critical push notifications on the go and stay in touch with your city around the clock.