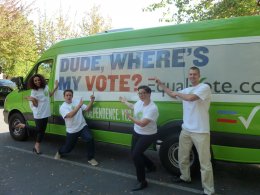 No American should be required to join a political party to exercise their right to vote.

Open Primaries is a movement of diverse Americans who believe in a simple, yet radical idea: no American should be required to join a political party to exercise their right to vote.

The mission of Open Primaries is to advocate for open and nonpartisan primary systems, counter efforts to impose closed primaries, educate voters, train and support spokespeople, and participate in the building of local, state and national open primaries coalitions.

During the 1920's, partisan primary elections were enacted to curb the power of party bosses and bring voters into the process of selecting party nominees. Today, 40% of voters do not wish to enroll in a political party, and closed primaries bar them from voting.

Closed primaries also make it more difficult for new coalitions to form and for Americans-both voters and elected officials-to come together across ideological lines.

Open Primaries' commitment is to public education and to leading legal, legislative and direct ballot initiative campaigns to enact and protect open primaries.

The Problem: Why do we need Open Primaries?

86% of Americans believe the government is broken under the closed primary system. Elected officials are persuaded by narrow party bases and other viewpoints or constituencies are excluded. The American electorate is growing more and more polarized, yet the people routinely describe their views as "mixed." 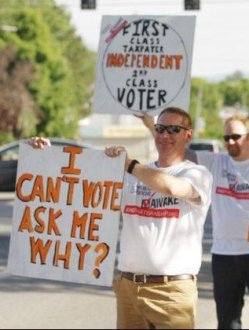 In many states, due to closed primaries and partisan gerrymandering, less than 5% of voters are deciding who represents 100% of that district or state. This is not representative democracy.

According to Gallup's May 18, 2015 polling, Americans have rated dysfunctional government as the top problem facing the United States for six consecutive months.

Congress's productivity is as at a record low. According to a Pew Research Center study, the 2013-2014 Congress was the second lowest productive session since 1947.

The biggest winner in open primaries are the voters. If we are to change the way our elected officials work for the American people, we must change how we elect our representatives.

After California voted to end partisan gerrymandering and enact open, nonpartisan primaries, the state went from the least competitive to the most competitive state in the country.

Secondly, Independents are the largest growing segment of the electorate. Today, 43% of Americans identify as politically independent.

Excluding independent voters from the first round of elections is unfair, undemocratic and contributes to the growing disconnect between the people and the parties.

A nonpartisan primary system requires that all candidates appear on a single primary ballot. All voters, whether registered to a party or not, are allowed to participate. And the Top Two winners move on to the general election, regardless of party.

This means that candidates must reach out to ALL voters and voters are able to vote for a candidate based on that individual’s views on policies that affect them.

Open primaries create more competitive elections, expand participation and create a legislature that works for the people, not the parties.

Asking Open-Ended Questions and Can You Afford This

My School Closures - Is your school open or closed?

Fernvale: An Open Hardware and Software Platform, Based on ...

In an open primary anyone can vote for any candidate in either party regardless of whether they are registered democrat or republican. In a closed primary you can only vote for someone in your registered party.

Does the united states have a closed or open primary? | Yahoo Answers

It's up to the states, but vast majority have closed. They maybe more but can only think of three that have open primaries. OOps did search 23 use open primary, but some of these let you pick your party election day.

@Caleb S.: Obviously my last tweet is conditional based on state of open and closed primaries Wed, 14 October 2015 03:50 AM