A measure to scrap a new Republican-backed election law has enough signatures to qualify for the 2014 ballot, but legal challenges are expected 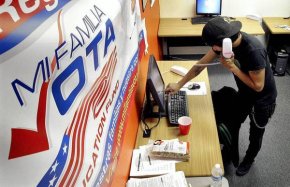 A worker for Mi Familia Vota in Phoenix works to get out the vote in 2012. Opponents… (Matt York / Associated Press )

TUCSON — A ballot measure to overturn a Republican-backed state bill that made sweeping changes to Arizona election law was certified this week as having more than enough valid signatures, but on Friday opponents vowed to challenge those signatures in court.

The effort to block the measure is the latest round in a growing fight in Arizona that revolves around voter participation and allegations of fraud.

Democrats contend that the Republican-led Legislature passed the measure in June as part of a bigger movement to make it more difficult for minorities to vote and third-party candidates to run in the state. Republicans said the law was needed to curb voter fraud and streamline the voting system.

Opponents of the law quickly got to work on qualifying a measure for the ballot in the next general election. On Tuesday, Arizona officials announced that the measure had the necessary signatures required for the 2014 ballot.

Fanning the flames, however, was an Oct. 8 announcement by Arizona Atty. Gen. Tom Horne that two separate voter rolls would be created for future elections — one listing people who could vote in all elections, and the other with those who could vote only in federal races. Both sides expect that order to be challenged in court as well.

Horne and other officials said the new system would help prevent voter fraud. Voting rights activists said it was a political ploy to stop immigrants and minorities from voting.

Horne announced the creation of the two voting lists after the U.S. Supreme Court ruled in June that voters didn't need to show proof of U.S. citizenship when registering to vote with a federal form.

Signed by Republican Gov. Jan Brewer in June, House Bill 2305 changes election laws in a number of ways. Among other things, it makes it easier for election officials to take people off the permanent early-voting list and limits who can return a voter's ballot to the polls.

The bill was approved along party lines in the waning hours of the last legislative session. For now, the law is on hold.

Robbie Sherwood, spokesman for the Protect Your Right to Vote Committee, said the group was overwhelmed by the support it received for the measure to overturn the law.

"This is Arizona and 115 degrees every day, and we were out there, " he said. "In spite of that we encountered so much enthusiasm, and the majority of our signatures combined a number of independents, Republicans. It was across party lines and all demographics."

Sherwood's group is a coalition of Latino, labor and nonprofit organizations.

Barrett Marson, spokesman for Stop Voter Fraud, said HB 2305 doesn't make it harder for people to vote. Instead, he said, it streamlines the system and protects against fraud. He said his group would challenge the opponents' ballot measure in court.

What are sample ballots?

Sample ballots can refer to a sheet that lists sample candidates - such as a presidential runoff that lists Stephen Douglas against Abraham Lincoln, or Jane Doe versus John Doe. Such a sample is used to demonstrate how a ballot is designed, and how a person would utilize the ballot to vote.
A sample ballot can also refer to a full list of the candidates running in the given election, based on office. For instance, a Secretary of State for one of the US states might have a sample ballot available in PDF form on the state website; a voter can print out the sample ballot, mark it with the …

What is a sample ballot.

@chiki_liver101 probably! It would be considered "long distance voting", but I think you can do the absentee ballot if you are a citizen but Wed, 14 October 2015 02:02 AM