Staten Island Board of Elections 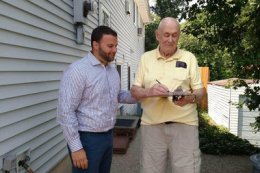 Assemblyman Joe Borelli will run unopposed for the 51st Council seat, which serves the South Shore of Staten Island, as nobody else had entered the race by the Monday deadline, according to the Board of Elections.

"I'm glad to hear I'll be representing the people of the South Shore once again, " Borelli said.

Borelli will have to run again in 2016 to keep the council seat and will vacate his assembly seat as soon as he's sworn in. Gov. Andrew Cuomo can call a special election to fill that vacancy or wait until the next State Assembly general election in 2016.

Borelli, who previously served as Ignizio's chief of staff, promised to fight for middle class residents of the outer boroughs when he gets into the council.

"The council's much more of a hotbed of controversy and I intend to insert myself as appropriate, " he said.

Staten Island Railway on board R160 St. George to Tottenville