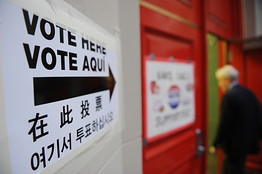 Voters handily defeated the initiative in 2003, when Mayor Michael Bloomberg put big money behind a push to abolish party primaries in New York City. But the Charter Revision Commission is once again considering placing the proposal before voters this fall and will convene a panel on the subject tonight.

For these top Democratic office holders, the incentive to keep partisan primaries is clear: the current system has put these politicians near the top of the heap. Bloomberg, as a self-financed political outsider, has an equally clear motivation for seeking to end the current primary system. He became a Republican before his first run for mayor because he had virtually no chance to win a Democratic primary.

But what the rest us non-candidates? What would nonpartisan elections do for us? According to David Schleicher, a law professor and native New Yorker who has studied municipal elections, nonpartisan balloting would make city voters less informed, less likely to vote and would create a less competitive atmosphere in down-ballot races.

In his study of partisan competition in municipal races, which was published in 2007, Schleicher compared the few remaining partisan election cities like New York and Philadelphia with the rest of the country. About 75% of American cities have embraced nonpartisan voting, he says.

There is a paradox in his findings. The issues that dominate national party politics often have little relevance at the city level, which makes partisan labels a poor indicator for a candidate’s policy positions. “Finding out what party a candidate for Congress belongs to tell you almost everything about her, ” he says. “But finding out the same information about a candidate in a local election tells you very little.”

Yet in cities with nonpartisan voting systems, where party affiliations are kept off the ballots, citizens enter the voting booth with no information. A candidate’s national party loyalty may tell you little about his or her views on city issues, Schleicher argues, but it’s better than no information at all.