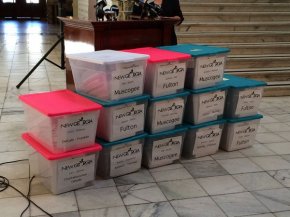 The national Lawyers’ Committee for Civil Rights sued Secretary of State Brian Kemp and five Georgia counties on Friday, asking a state judge to make sure more than 55, 000 people will be able to vote in the Nov. 4 general election.

The lawsuit comes in direct response to the handling of voter registration applications by the state and Fulton, DeKalb, Chatham, Muscogee and Clayton as they were submitted by the New Georgia Project, a Democratic-backed group under investigation by Kemp over accusations of voter registration fraud.

More than 50, 000 of the paper forms submitted by the group seem to be lost in the state’s voting system, Lawyers’ Committee attorney Julie Houk said. They neither appear on voter rolls nor do they show up on lists of “pending” voters who have been asked to provide more information to verify who they are.

An additional 5, 000 of the forms do appear on pending lists, but Houk said some of the forms show the information originally submitted to be accurate. In other words, the Lawyers’ Committee is questioning why these voters must provide additional proof of identification.

What is the deadline for voter registration in georgia?

October 6th is the deadline date for voter registration in Georgia. :) rocks~~