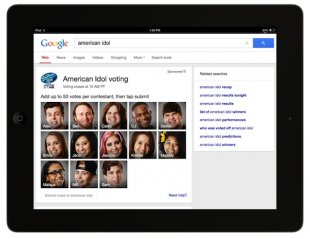 Are you an "American Idol" fan? Do you vote on your favorite performers? Then this little announcement from Google may just have you jumping for joy – especially since the 13th season finals kick off tonight on the show. Now, you can cast your vote directly from Google search results.

We’ve partnered with FOX to serve as an official voting platform for Idol and you can vote for Idol finalists on Google from your phone, tablet, or desktop.

If you search for "American Idol" during the voting portion of the show (if you try it now, nothing will happen), Google serves up "American Idol" contestants at the top of the results, like so:

Since we can't replicate the search now, it's unclear on whether these will trump all other results on the page, or be a standalone results. We do see related searches in the right side of the screen. 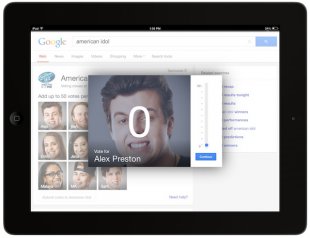 You can add up to 50 votes per contestant, which is comparable with the amount of votes you can cast elsewhere like phone or text.

Once you submit your vote, Google serves up "Idol"-related video content, and the ability to get social on Google+ with fellow "Idol" worshippers.

It would be interesting to know if sites that normally compete for visibility for "American Idol" queries see a spike in traffic with this new feature.

As another exciting announcement for "American Idol" fans and Facebook users, the show partnered with the social media platform to show "voting progress updates based on real-time East Coast voting data during select live shows, " which gives viwers "their first-ever look at how their favorite finalists are faring in the voting polls at a given time, " the announcement said.

On air, AMERICAN IDOL XIII and Facebook are collaborating to provide a groundbreaking, real-time view of East Coast voting trends and create a two-way connection with fans during the live performance shows. The innovation will allow at-home viewers to get a first-ever look at an exciting array of voting information, such as demographic voting trends and relative contestant rankings – as it happens live! In addition, as voters and supporters of the AMERICAN IDOL XIII hopefuls chime in and back their favorite performer, they will have an opportunity to become part of the show – and see their actual Facebook profile picture featured in the telecast.
Source: searchenginewatch.com