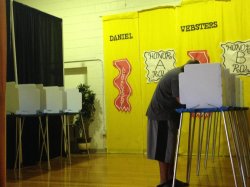 With all precincts reporting, Adam McGough shows a win by 35 votes over Paul Reyes in District 10.

Casey Thomas beat Joe Tave 53 to 47 percent in District 3. Tiffinni Young and Erik Wilson won with 55 and 60 percent and districts 7 and 8, respectively.

Casey Thomas pulled ahead to 54 percent against Joe Tave with 28 of 35 precincts reporting.

Adam McGough and Paul Reyes remained nearly tied with 25 of 30 precincts reporting. McGough is up 47 votes.

Adam McGough and Joe Tave have pulled ahead in districts 10 and 3 — by less than 20 votes.

With half of the District 10 precincts reporting, Paul Reyes and Adam McGough are virtually tied, with Reyes up 34 votes. 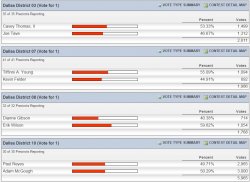 Casey Thomas has a 58-vote lead over Joe Tave with 13 of 35 precincts in District 3 reporting.

Young and Wilson are retaining their strong leads.

Casey Thomas is pulling slightly ahead in District 3. He has 52 percent to Joe Tave’s 48 percent with 10 of 35 precincts reporting.

The other races held roughly the same margins, with Tiffinni Young and Erik Wilson solidly in the lead in districts 7 and 8.

With only three of 30 precincts reporting, Paul Reyes held his 52 percent lead over Adam McGough’s 48 percent in District 10.

Runoff candidates in Dallas City Council districts 10 and 3 were locked in close races as the results of early voting were released Saturday evening.

The close margins mean it could be a slow night as candidates wait for the results of Saturday Election Day voting.

Both districts 10 and 3 received strong out-of-district attention and money due to the candidates’ different stances on the proposed Trinity Parkway. Opponents of a large toll road through the Trinity River corridor campaigned heavily for McGough and Tave, while donations from business interests went to Reyes and Thomas.