Hillary Clinton's numbers continue to fall, while support for Vermont Senator Bernie Sanders has surged significantly in Rasmussen Reports' latest look at the race for the Democratic presidential nomination.

Our latest national telephone survey finds that 50% of Likely Democratic Primary Voters still say they would vote for Clinton if their party's state primary was held today, but that’s down nine points from January and 12 points from last November. Twenty-four percent (24%) now prefer Sanders who had only four percent (4%) support nine months ago.

In the face of increasing legal questions about the safety of secrets on the private e-mail server she used as secretary of State and of the vigorous intraparty challenge from Sanders, belief that Clinton is likely to be next year's Democratic presidential nominee has dropped noticeably over the past month. 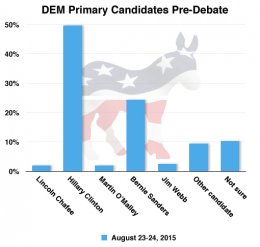 (Want a free daily e-mail update? If it's in the news, it's in our polls). Rasmussen Reports updates are also available on Twitter or Facebook.

The survey of 536 Likely Democratic Primary Voters was conducted on August 23-24, 2015 by Rasmussen Reports. The margin of sampling error is +/- 4 percentage points with a 95% level of confidence. Field work for all Rasmussen Reports surveys is conducted by Pulse Opinion Research, LLC. See methodology.

Vice President Joe Biden is reportedly moving closer to a decision whether to challenge Clinton for the Democratic nomination because of her e-mail woes. However, Democrats weren’t overly enthusiastic about a Biden run earlier this month.

Massachusetts Senator Elizabeth Warren, a favorite of left-leaning Democrats, has said she does not plan on running for president in 2016. Liberals hope at a minimum that Sanders, a self-proclaimed socialist, will push Clinton’s positions to the political left.

Roughly half of Democrats of all ages support Clinton in the Democratic race, but Sanders runs strongest among those under 40. Whites like Sanders more than blacks and other minority voters do.

Forty-five percent (45%) of all voters - but only 18% of Democrats - now consider the national security questions raised about Clinton’s use of a private e-mail server while serving as secretary of State to be a serious scandal. Twenty-eight percent (28%) of likely voters consider the matter an embarrassing situation, while nearly as many (23%) say it’s no big deal.

What does The Rasmussen Reports daily Presidential Tracking Poll for Monday show?