What To Look For On Election Day In Mass. 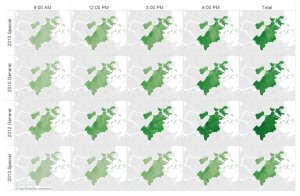 The campaigning is over, and the general election is finally upon us. As we did during the primary, we will be live blogging Election Day, bringing you the latest on how it’s unfolding. The live blog will continue into the evening, as returns come in and speeches are made.

Here are some things we’ll be watching for.

The Race For Governor

The final batch of pre-election polls were near-uniform in showing an advantage for Charlie Baker heading into Election Day. With the two published on Friday and Saturday, 10 of the final 12 public polls showed Baker ahead. But as we’ve observed previously, polls, both in Massachusetts and nationally, have tended to understate Democratic support the past few election cycles. Baker is clearly leading, but the result is not a foregone conclusion.

Turnout in midterm elections is consistently below that in presidential years, and differs in ways that are likely to help Baker. The type of voter most likely to turn out this time will be more favorable to Baker than Martha Coakley: whiter, wealthier, older and more suburban.

We will know very early in the day if Coakley’s turnout machine is working. As we did on primary day, we’ll be using the turnout figures reported by the city of Boston to get a sense of likely turnout statewide. The city Elections Department reports vote counts regularly throughout the day, broken down to the precinct level. Based on analysis of past elections, we know that the final number of votes statewide is somewhat closely related to turnout in Boston, even as early as 9 a.m. So we’ll have a range of turnout based on those 9 a.m. figures, which we will update over the course of the day.

These Boston turnout figures also offer an important indicator of Martha Coakley’s chances. We will be able to see, for instance, whether the Coakley campaign is getting the vote out in the areas most likely to vote Democratic. Most of the top Democratic precincts are the majority-minority precincts in the center of the city, in Roxbury and Dorchester and Mattapan. Keep an eye on these precincts on the map: If they are filling in a lighter shade than they have in past years, that spells trouble for the Democrats. If the geographic “middle of the city” stays home, it likely indicates a better day for Charlie Baker.

Of course, Boston turnout updates can only tell us so much. We’ll have a rough sense of how many people are voting and whether Democratic-heavy areas are turning out. But after the 6 p.m. update, we’ll be in the dark, waiting for the vote counting to begin after the polls close.

Spain goes to the polls amid mass popular protests

@CBCNews Hi, will it be possible to watch live CBC TV coverage of the election results next Monday online outside Canada, eg in UK? Tue, 13 October 2015 09:01 AM