Obama implores Marylanders to vote — and for Anthony Brown for governor 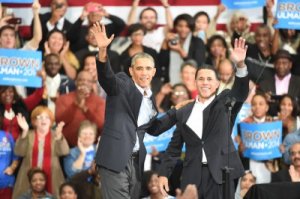 President Obama stood before thousands of Marylanders in a high school gym in Prince George’s County on Sunday and urged them to vote for Democrats who fight for the working class — such as gubernatorial candidate Anthony G. Brown.

The president told the largely African American, and wildly enthusiastic, crowd that Republicans want voters to become so cynical that they don’t vote.

“If you want good policies to continue in Maryland, you’ve got to vote for them, ” Obama said, and then listed priorities such as a higher minimum wage and making college more affordable.

Although Democrats outnumber Republicans more than 2 to 1 in Maryland, Brown has struggled to keep a comfortable lead over his Republican opponent, businessman Larry Hogan. Part of the reason is that Brown hasn’t locked up the support of African Americans, who heavily favored Obama in 2012, according to a Washington Post-University of Maryland poll released this month.

In that poll, 77 percent of likely African American voters supported Brown. In 2012, Obama won support from 97 percent of black voters, according to an exit poll.

Although Obama has seen his popularity fade in many parts of the county, he was welcomed with raucous applause at Dr. Henry A. Wise Jr. High School in Upper Marlboro. At times, the crowd punctuated each of his sentences with cheers. It also defended him with boos when a heckler challenged Obama on immigration. 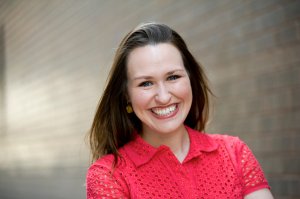 It was a level of enthusiasm that Brown has yet to see as he campaigns to become the state’s first African American governor and thenation’s third to be popularly elected.Some in the crowd said they waited in line for hours to see Obama, not Brown.

As thousands of supporters waited in the gym, Maryland lawmakers urged them to vote early, starting Thursday.

Rep. Steny H. Hoyer (D-Md.) spoke about civil rights activists who were beaten and killed as they fought for the right to vote. That fight continues as some legislators try to make it harder to vote, he said.

“They know what you know and I know: If we show up, we win, ” Hoyer said, later leading the crowd in a chant of “Vote! Vote! Vote!”

Brown continued that line of messaging.

“We don’t have to revisit the struggles and the suffering of the 1950s and the ’60s and generations of history in this country to exercise that most important and fundamental right to vote, ” Brown said.

Hogan spent Sunday afternoon in Southern Maryland at the annual St. Mary’s County Oyster Festival. In coming days, he will welcome several luminaries from his own party. Tom Ridge, a former Pennsylvania governor and U.S. secretary of homeland security, is scheduled to attend a reception Monday night. On Tuesday, New Jersey Gov. Chris Christie, chairman of the Republican Governors Association and a potential 2016 presidential candidate, will support Hogan at a fundraiser in Potomac.

Where is rapids located in palm beach county?

All supervisors in Palm Beach will begin conducting early voting in their main and branch offices 15 days before the election.