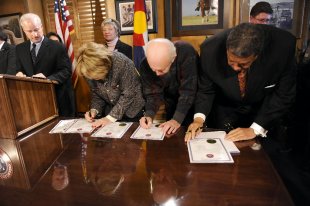 (Can you name the other Democratic winners? And which candidate took every county?)

MSNBC’s Chuck Todd brought up Colorado’s first electoral vote, the controversial election of Rutherford B. Hayes, when Todd was in town last week for the presidential debate at the University of Denver debate.

Here’s a look back on how Colorado voted in presidential elections:

Colorado entered statehood in 1876 as the ultimate swing state in one of the most contentious presidential elections in U.S. history.

It took 132 years, but this year Colorado has regained its battleground status in what is shaping up as another historic presidential election.

In the intervening years, presidential politics have exposed the state’s political quirks and trends.

Democrats have won the state just five times since 1920.

Boulder County, considered the state’s center of liberal thought, voted for Republican Ronald Reagan not once, but twice.

And only one time since 1920 have all 63 counties voted for the same presidential candidate – the nondescript Warren G. Harding.

In preparation for the upcoming showdown between Republican John McCain and Democrat Barack Obama, the Rocky Mountain News took a look at the presidential elections in Colorado since statehood, including county-by-county results since 1920.

It shows a history of independence, bouts of unpredictability and a warning not to take Colorado voters for granted.

The state made a big splash in presidential politics its first time out in 1876.

“It changed the course of history, you might say, ” said state historian Bill Convery.

Republican Ulysses Grant was president and Republicans controlled Congress in 1876 when Colorado leaders approached them about statehood, Convery said. Everyone predicted a close presidential race between Republican Rutherford B. Hayes and Democrat Samuel Tilden.

Just to be sure, the Republican-controlled state legislature declared there was not enough time to hold a popular election for president so soon after statehood and awarded the three electoral votes to Hayes.

Hayes won the election by one electoral vote even though he was beaten in the popular vote by Tilden, 51 percent to 48 percent.