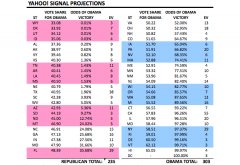 With fewer than nine months to go before Election Day, The Signal predicts that Barack Obama will win the presidential contest with 303 electoral votes to the Republican nominee's 235.

How do we know? We don't, of course. Campaigns and candidates evolve, and elections are dynamic events with more variables than can reasonably be distilled in an equation. But the data-based on a prediction engine created by Yahoo! scientists-suggest a second term is likely for the current president. This model does not use polls or prediction markets to directly gauge what voters are thinking. Instead, it forecasts the results of the Electoral College based on past elections, economic indicators, measures of state ideology, presidential approval ratings, incumbency, and a few other politically agnostic factors.

We'll dip into what the model says in a moment, but first a note about models in general: there are a lot of them, from complex equations generated by nerdy academics (like the team at The Signal) to funny coincidences like the Redskins Rule, which holds that the incumbent party keeps the White House if Washington's football team wins its last home game. (This is true in 17 of the last 18 elections!) Every year, some of these models are right and some are wrong, and the difference is often just luck. As a result, models get a bad rap as being very good at predicting the past and lousy at predicting the future.

But every election gives researchers more data to work with and a better idea of what works and what doesn't. Not all models are bogus just because many of them are. Our model combines powerful scientific algorithms with both real-time and historical data sources. We have examined the last 10 presidential elections and found that the Yahoo! model, which is the work of Yahoo Labs economists Patrick Hummel and David Rothschild, would have correctly predicted the winner in 88 percent of the 500 individual state elections.

The following chart shows our predictions for each state in the general election, based on this model.

In addition to predicting winners, you'll see that the Yahoo! model predicts by how much each candidate will win each state. These estimates are, on average, under 3 percentage points off. (We exclude Washington, D.C., in the model and assume it will go for the Democratic candidate.)

The Yahoo! model assumes that the president's approval rating will stay the same between now and mid-June, that each of the 50 states will report personal income growth that is average for an election year, and that certain key indicators of state ideology will remain unchanged this year. Although the model currently predicts that Obama will win 303 electoral votes in November, please note that it predicts only probabilities of victory, and that many states are nearly toss-ups.

What happens if the electoral vote is tied?

To whom will Nebraska give all their electoral votes in 2012?

One really never knows until the votes are cast, but the experts all predict with a high degree of confidence that Romney will win all of Nebraska's five votes.