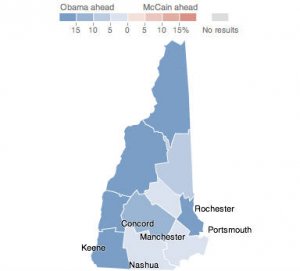 A six-year grudge match played out in the Granite State as Jeanne Shaheen, a former Democratic governor, defeated the Republican incumbent, John E. Sununu, in the race for the Senate.

The state re-elected two Democrats to the House, including Carol Shea-Porter, who again defeated Jeb Bradley. Mr. Bradley was a two-term Republican congressman when Ms. Shea-Porter unseated him in 2006; she held her own in a challenge this fall.

In 2002, Mr. Sununu narrowly defeated Ms. Shaheen in a contest for the seat. This year, Mr. Sununu, 44, had been considered vulnerable. Ms. Shaheen, who is 61 and served three terms as governor, ran a cautious campaign that linked Mr. Sununu to President Bush. In a state that is increasingly Democratic and gave 55 percent of its votes in the presidential election to Senator Barack Obama, the argument was a powerful one.

Senator John McCain, however, had strong ties to the state’s Republicans, who resuscitated his campaign this year when he won the presidential primary. Mr. McCain made a nostalgic, final-hour swing through the state last weekend.

How many electoral votes is New Hampshire?

New Hampshire has four electoral votes. It is usually a swing state. !

RT @clevelanddem: New Hampshire and their 4 electoral votes are not as important as #morningjoe makes people believe. Wed, 7 October 2015 07:18 PM