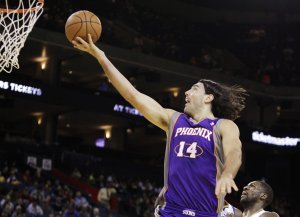 While everyone seems to agree about the centrality of Ohio to Romney's chances, we though we would bring a bit of cold, hard math to bear on the conversation - arithmetic that proves beyond a shadow of a doubt why Ohio is an absolute must-have for the Republican nominee.

First, let's take a look at our current electoral map:

That leaves Obama with 237 electoral votes to 206 for Romney. (Romney's total includes North Carolina, which we continue to believe he will win.) And, it leaves us with eight toss up states with 95 combined electoral votes. They are (from east to west): New Hampshire, Virginia, Florida, Ohio, Wisconsin, Iowa, Colorado and Nevada.

Give Romney Florida and Virginia. (And, yes, we realize both states are very close and could go either way - but without winning those two the math becomes very tough for Romney.) He's at 248 electoral votes. Add Ohio to that and he's at 266 electoral votes. That's the equivalent of electoral college layup for the win; Romney would only need to win one of New Hampshire (4 electoral votes), Nevada (6), Colorado (9) or Iowa (6) in order to be elected president.

On the other hand, assume Romney wins Florida and Virginia but loses Ohio. Now he needs 22 electoral votes to get to 270 - the equivalent, given the state of the swing states, of something between a three-point shot and a half court shot to win.

That's because Ohio, despite population losses over the past few decades, remains one of the few swing state electoral vote treasure troves left on the map. Romney could win New Hampshire, Nevada and Iowa and still not equal the electoral votes he would get by simply winning Ohio.

The road to 270 electoral votes

Does your vote count? The Electoral College explained ...

Why does Ohio have 20 electoral votes?

The Electoral College consists of 538 elected representatives who select the President and Vice President of the United States.

RT @stephenkruiser: .@JohnKasich is just awful. I don't care if he can gift-wrap Ohio's electoral votes, he has no place on the ticket. Tue, 6 October 2015 10:34 PM