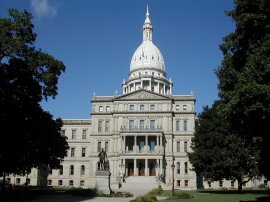 A Michigan lawmaker has proposed a bill that would split the state’s electoral votes in presidential elections instead of awarding them all to a single candidate.

“Michigan is a flyover state for presidential elections, ” Rep. Pete Lund (R), the bill’s sponsor, said in a statement. “Candidates running for president currently don’t feel the need to come to Michigan in order to win.”

“This bill guarantees the winner of the popular vote still gets the majority of electors while making Michigan an important state for presidential elections, ” Lund said.

He said the bill would force candidates “to speak on issues affecting our state, and more importantly, create policies that benefit all Michigan residents.”

What Is an Electoral College for Presidential Elections?
Related Posts

@whateverbarry well on a presidential election our votes is not what count cause it done by the electoral college now on congress it does Mon, 12 October 2015 01:58 PM