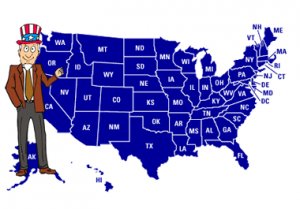 A nominee needs a majority of the electoral votes to win the presidency. You'll notice, on election night, that the TV commentators keep track of the states each nominee wins. They add up the number of electoral votes that each state win represents. The race is over as soon as one of the nominees gets one more than half, or 270, of the total of electoral votes.

By the end of election night or early the next morning, the nation usually knows the winner of the election. The president is not officially elected until the members of the Electoral College cast their state's votes in December, however, and Congress counts those votes on January 6.

Many have criticized the Electoral College system over the years. Although some attempts to change it have been successful, two important criticisms still remain unanswered. First, there is no guarantee that an elector who is pledged to vote for a certain candidate will actually do so. Only a few electors have switched their vote, and none changed the outcome of an election. The winner-take-all system is the second criticism. By getting just one more popular vote that the opponent, a nominee can get all of a state's electoral votes. As a result, three nominees have been elected president even though their opponents received more popular votes nationally.

Could neither candidate reach 270 electoral votes?

The Lionel Show - The Electoral Map

How are electoral votes allocated to states?

RT @trump2016fan: Loophole allows Illegals to give states like California even more electoral college votes! With 30 million illegals is Am… Thu, 8 October 2015 05:02 AM

@PeitonBursh we're one of the states where it's the electoral college votes and not the people's? Learned that in gov. Thu, 8 October 2015 08:59 AM