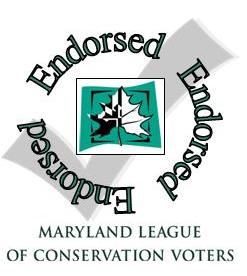 On November 4th, Eighty-six percent of candidates we endorsed won their races in the statewide general elections.

We have seen great progress in Maryland on the environment, and, as a non-partisan organization, we are reaching out to Governor-Elect Hogan to begin a conversation about how to protect our economy and the environment.

With such overwhelming support for ballot measure Question 1 (81.6%) on a transportation lockbox, it's obvious that Maryland voters want smart, environmentally conscious policies that promote accountability of public funds.

All over the state, candidates talked about creating Maryland jobs through investing in renewable energy and reducing polluted runoff, while pledging to protect our children from the dangers of pesticides, fracking and industrial pollution. We congratulate all the winners and thank all those who chose to participate in the democratic process.

Maryland voters elected long-time environmental champions, like Brian Frosh and Peter Franchot, among many others on Tuesday. Because of this, Marylanders will have a stronger voice in Annapolis when it comes to protecting our lands and cleaning up our air and water - including the Chesapeake Bay - not just now but for future generations.

We're excited about all the new and returning legislators coming to Annapolis and the opportunities we will have to work together to protect our environment and Maryland families. Our critical work to speak out for our air, land and water - and hold elected officials accountable for their actions - will be more important than ever in the months and years ahead.

I Commit To Vote In 2012 General Election

@chmtp: wondering what the electoral college map would look like if we had a Kasich v Webb general election. Wed, 14 October 2015 02:53 PM