Missouri State Board of Elections

State Board of Mediation 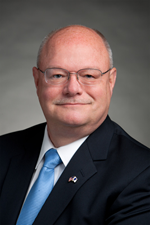 Butch Albert was appointed to serve as chairman of the State Board of Mediation in June 2014. Raised in Maryland Heights, Missouri, Albert earned a bachelor's degree from Northeast Missouri (now Truman) State University before joining the St. Louis County Police Department. He retired after 29 years as a sergeant, having worked in all divisions of the department and with the Major Case Squad of Greater St. Louis. Immediately prior to his appointment to the State Board of Mediation he was the executive director of The Safety Net of Missouri, a charitable organization based in Cole County that assists surviving families of public safety officers killed in the line of duty. Albert also served in various capacities with the Fraternal Order of Police for many years.

Board of Elections says ad is OK

Penn State Board of Trustees - May 9

@Craig Wilson: MD group to publish through Consumer Reports next year on the true availability of data through state medical board websites #CHTForum Thu, 8 October 2015 06:15 PM