Elections – Government of the Student Body 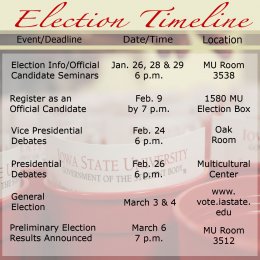 Announcement made for the 2015 GSB Elections!

The GSB election timeline has been announced for the 2015 elections. Elections will take place on March 3 and 4, and the winners will be announced on March 6th. Candidates interested in running for Senate or President/Vice-President need to attend a candidate information session before being able to have their name on the official ballot.

The Government of the Student Body elections are held annually in the spring for Senate and President/Vice-President candidates. Each student is represented by two Senators–one for their residency and one for their college–so students wishing to fill these offices must either reside in the residency constituency or be enrolled in the college they are wishing to run for. GSB has 15 constituencies which include all of the colleges on campus (including the Graduate College and Veterinary Medicine) and the residency constituencies which are: Campustown, Frederiksen Court, Interfraternity, Panhellenic, Off-Campus, Residence Halls and Schilleter University Village.

Any Iowa State student who is enrolled at least part-time is eligible to run for either President or Vice President. The President and Vice President run on a slate and are voted on by the entire student body. On election day, students are able to vote by going to vote.iastate.edu. For more information about the GSB elections, please click HERE to learn how to run for an office or contact the Election Commission (rodgeral@iastate.edu).

@Khaled A M Bakkar: And by democratic elections we choose a head of state & government of the people & not of the militia leaders or former feudal leaders Mon, 12 October 2015 04:13 AM

RT @RommyMom1: Alam's: rotten time to die. If only he passed before the Elections, he would have gotten a state burial by the Fed governmen… Sun, 11 October 2015 04:23 PM