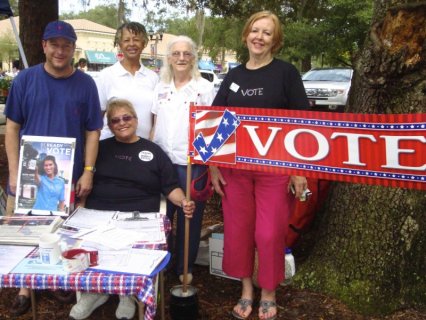 (Photo courtesy of the Office of the Secretary of State)

Arizona, Kansas and Georgia are trying to force a federal panel to add proof of citizenship requirements to federal voter registration forms, and they will make their case in a hearing Tuesday morning in Kansas. This case moved back to the courts after a federal commission denied the states’ request last month.

Arizona uses a state registration form that requires voters prove their citizenship, either with a driver license, passport or birth certificate. Kansas and Georgia have similar laws. Ken Bennett is Arizona’s secretary of state.

"The Arizona voters voted back in 2004, people who want to register to vote in Arizona should show proof of citizenship to get registered, " explained Bennett.

But, voters can also use a federal form to register for any election in all other states. That form only requires voters to sign a statement under oath that they are citizens but does not require proof.

Last summer the Supreme Court ruled Arizona must accept those federal forms, too. Now the three states want the federal forms to be updated with their states’ proof of citizenship rules.

Jonathan Brater is with the Brennan Center at the New York School of Law. He is representing the League of Women Voters which opposes the additional requirements.

"Arizona has been trying to impose a burdensome show your papers documentary form of citizenship on top of that form. They’ve been rejected several times by the Electoral Assistance Commission, " said Brater. "Since these rules have gone in place, they’ve had a very hard time registering people to vote. These are really unnecessary burdens on registration. They’re burdens that no other states have for the most part, so we are hopeful the court will recognize the damage these proof of citizenship laws have had."

The Election Assistance Commission has rejected Arizona’s earlier requests to add the state’s requirements to the federal form. Brater said he expects whoever loses to appeal. Both Brater and Bennett said that whoever loses the hearing in district court will most likely appeal and the case will eventually end up before the Supreme Court.