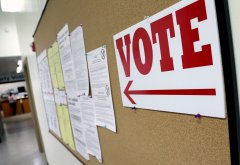 Early voting began Tuesday for the 2014 primary election. In preparation, I asked my followers on Facebook and Twitter last week if they had any questions regarding the upcoming election. I took those questions and sent them over to James Henson, director of the Texas Politics Project at UT Austin. His answers offer a basic guide on how primary elections work in Texas:

-What kind of primary does Texas have?

It’s somewhere in between [open and semi-open] to the extent that you don’t have to register ahead of time, you don’t have to signal your intent in any way to vote in one primary or the other, but once you’ve voted in one primary if there’s a run off in the other primary you can’t switch mid-process. Say right now you voted in the Democratic primary, on the Republican side there is probably going to be a bunch of runoffs. Well once you’ve already voted in the Democratic primary, you can’t then go vote in the Republican runoffs. That’s why people call it semi-open.

-Can Texans register with a specific party (ex: “I’m a registered Republican/Democrat”)?

-If you vote in one party’s primary do you have to vote for that same party in the general election?

No, not at all, how would you enforce that?

-Can any non-citizens vote?

-Can people tell who I vote for?

You can tell what elections a person has voted in, but at no point can you tell who they voted for. That’s why we call it the secret ballot.

-When does a runoff election occur?

The Grassroot anxious over Primary in Texas

When are the primary elections for Texas held?

The per-nefer is the "house of beauty" where the internal organs are removed during the Egyptian process of mummification.

@ladyeng48: reason Dems are winning elections is they do not completely demolish each other during primary. They are united as a party. RNC take note Wed, 14 October 2015 01:59 AM

RT @rydelllington: I just really want to encourage everyone to vote in the primary and general elections if you're are eligible because you… Wed, 14 October 2015 02:04 AM